Greta in Davos, second round

This year the Davos clash between Greta and the world elite was historic. It became a battlefield of radically opposite strategic lines of thought regarding climate policy. I am referring to the age gap (young against old), to the mental gap (playing-safe against gambling), and the lifestyle gap (simplicity against luxury) between those strategic mindsets. How to bridge them? Let's take a closer look at this battlefield and let's propose a narrow escape for friend and foe.

As usual the Davos top was highly chic. It was a come and go of all kinds of owners, leaders, and honchos in private planes. There are about 23.000 of those vehicles worldwide, so when a lot of them are coming together – last year, Rutger Bregman counted 1500 of them – you can safely say Davos is the focal point of winners. On this playing field, Greta launched a deep strategic attack. I don’t want to think too much about how hard this must have been for her, but I did enjoy her speech. It was almost perfect. Her demand for a zero-emission solution within a year, adding the question: “How are you going to explain to your children that you did not give the zero-emission option a try?” was a righty.

Had she dealt them a left uppercut she would definitely have beaten their lights out. Which uppercut I am speaking of? Well, telling them that their power and glory are entirely based on a couple of economic rules that allow and regulate winning. That those rules are the single pillar supporting their attitude, decision-making, and hegemony, and that that pillar must be torned down because those rules make it impossible to collectively and decently reverse climate change by sacrificing a part of our prosperity.

After this starter she could have let them swallow the following supposition: “Ladies and gentlemen, we are facing the choice between losing the earth and losing a part of our prosperity. I am sure that most earthlings are willing to choose the second option when offered a set of cohabitation rules (= alternative social model = survival concept) that allows them to relinquish part of their prosperity in a decent way.”

She could have elaborated the forgoing as follows:
We will achieve that zero-emission goal in the short term only if we strongly reduce the global series-connected production processes as well as all communication and traffic flows. This is only possible if we relinquish a considerable part of our prosperity. However, such a collective trajectory cannot be realized under the current economic game rules because that game is designed to win, not to take a collective step back and give up prosperity. After all, the current game rules do not guarantee that someone who sacrifices prosperity can trust others to do the same, nor do they prevent such a sacrifice causing a free fall in the social hierarchy. We are currently in a race for resources. No one ever has enough because there will always be someone in the vicinity waiting to undermine or obtain already acquired resources. This insecurity leads to growth, expansion, competition, and – consequently – innovation in order to beat others. This never stops.

We must therefore adopt – perhaps only temporarily – a safer arrangement for everyone. Ensuring equal access for all to local livelihoods (land, water, homes) could be the solution because such an arrangement not only neutralizes the game, it also guarantees that everyone can fulfill their life’s basic necessities (food, clothing, shelter, health, distraction) in an almost emission-free way via local circular processes. See a framework here..

‘Equal rules for everyone, and equal resources within reach’ is the basic prerequisite for realizing very quickly the zero-emission option. If Greta had fitted out her primary accusation with this specification, a heavy ball with a lot of spin would have been hit toward the flying elite: “How are you going to explain your children that you did not consider, proposed, or opened the discussion on achieving zero-emission by assigning free local resources to young adults?” 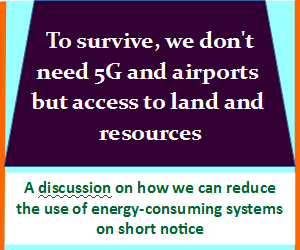 This article was written in February 2020. A Dutch version is published on duurzaamnieuws.nl