Move down. Other versions.

The escalating war on climate change

My father died. Then I visit my old mother. When I have hardly been inside for three minutes, she says viciously, "Just so you know, I immediately put the picture of his father (note: an unpleasant kind of man, according to her) in the garbage bag." I shrug and say, "You act as if I care; I didn't even know the man!". She: "You were named after him!". After a few hours, a light begins to dawn on me. Is that (her projection of him onto me) why she has actually always distrusted me somewhere?

I mean by this, most wars are never declared, and when they are, they're ill-defined. The war on drugs is aimed at dealers and producers, not against the social and economic misery that makes people turn to drugs. The war on cancer focuses on the tumor, not the pesticides and diet. A mother beats her daughter because she's the darling of her husband who doesn't want to hug her (i.e. his wife) anymore because she has become too fat. And, finally, in my opinion, the war on climate is mostly equally poorly defined.

It's not the climate that's going to kill us, but the game we've been playing with each other so far. The rules that are governing the shape of our economic interactions are the only reason why we no longer fit within the earthly boundaries. The way we make and distribute the porridge: because that's where the hunger for energy comes from. An insatiable hunger that keeps our economies guzzling more and more energy. We have to tinker with that rather than the climate.

No, we don't tinker with those essential social rules about how we treat each other, and about how we give each other access to means of livelihood. No way! We are so touchy and scared of each other (which is why we have based our game on suspicion and hedging ourselves) that we continue to dodge the rules-issue and instruct the youth that we must attack the climate, while it is precisely this being at each other throats that has materialized in a culture of abandonment, of getting ahead of the rest. We created for that reason more and more energy applications that daily blows towering GHG-clouds into our atmosphere. Our hectic pace is driven by the possibility (freedom) of bringing in more porridge than another, and by the fear of coming home without porridge. But while we are so constantly trying to get our share, being where we are is minimized. We are obsessed with getting somewhere. Looking for more in our mutual war for more.

Unfortunately (or fortunately!), the hour of truth is now rapidly approaching that we can no longer side step the explosive rules issue. Why? Because when climate disruption becomes a matter of life or death for the entire human race, and we really have to start applying radical brakes to emissions, the current rules will make any quick rescue attempt impossible. And so we have to work on them. We need to radically reform them because they seriously constrain our leeway to rescue ourselves from the grip of the fossil energy addiction. They prevent us from surviving without emissions; i.e. from making and distributing the porridge without emissions.

If the tech fix (i.e. the war for more) continues to fall through, and for many it already has, what path to rapidly declining can we take, and who is ready to lead the attack? So let's first scrutinize the battle-field. What are the main opponents we find there?

It is clear that only the Basics adherents want to pave a survival path for humanity by tinkering with essential rules of society (i.e. war on rules and laws). So: what plan of attack on the rules of society do the Basics have in mind to prevent − via a rapid and sharp reduction in the demand for energy − the climate from becoming unlivable.

What plan of attack?

Because the Basics field is very broad and, like their opponents, is currently coloring from day to day, they have a wide variety of proposals that revolve around a deliberate reduction of overconsumption and overproduction. A French example: "C'est un processus de sobriété organisé pour aller vers des sociétés écologiquement viables et socialement souhaitables et vers une relocalisation des activités productives au sein de bio-régions autonomes". However most Basics descriptions are far too rosy in my opinion by mainly pointing out benefits, and not the life-changing U-turn character if you really want to go back-to-basics. Virtual hubris and inexperience with reality drip from them. Not bad at all, of course. At least it communicates, and is constructive, and that's the important thing.

Now let's try to illuminate − reasoning from the core problem (= human survival) that all these proposals seek to deal with − crucial contours and details of that path by listing the core aspects that many Basics-authors mention and partially agree on. Sorry, I won't mention names in order to keep the path clear and short, and to give it some coherence.

Taking all this into account, a plan of attack with the above described contents would turn the functioning of present-day societies economically, socially and ecologically completely upside down. It is conflict material of the magnitude that even convinced Basics-people do not want to lift the lid of too often in order to look (nervously) under. Change is difficult anyway (see this discussion) but the above boils down to giving up a whole slew of wealth and convenience, plus letting go of anchors to which we have been tied for centuries.

It may help to mentally imagine such a leap or U-turn not as a static transformation (i.e. a huge mountain on the road), but as a dynamic process of small steps within a broader context. Let us therefore try to imagine how the war on certain blocking basic societal rules (laws) can further escalate given this plan and with these opponents. How can the attack on rules going to work out?

On the battle-field described above, I see three battles being fought in the next few years that will ultimately merge into one another.

The first one is the battle between Green Growers and Usuals to make all economic processes emission-free in time to keep climate change below 2 degrees. Within a few years (this is already clear in fact, see Anderson at t=10 min) it will turn out that we are heading straight for 3 to 5 degrees, and are getting quite close to trigger fatal positive feedback loops (i.e. amplifying cycles).

This will immediately start the second battle, between central governments and Usuals. Governments have so far been very supportive of owner decisions. They put some taxes in the way here and there, but that's just tickling. However, the moment (= the moment it is foreseen that the first battle will be lost) that the climate bear turns out to be absolutely unstoppable (not even by future carbon removal), governments will start to tighten the thumbscrews on emissions. The international flows (long chain production, trade, transport) will dry up, and governments will take over the ownership decision around the local production of services and products to fulfill the basic needs of the population (for whose well-being they are totally responsible) with minimal emissions.

Meanwhile, the third battle will then be able to push the outcome of the second battle in a certain direction. The third battle is that between Basics and governments. It consists of the ongoing struggle of young people − already for years, but now in an increasingly fierce and massive way − to organize their own living and working environment as emission-free and as basic as possible. It is a battlefield because most of them run into the wall of establishment requirements (education, equipment, fixed social security charges, compulsory insurance) and financing (im)possibilities, time after time. The speed of delivering this third battle will depend to a large extent on the size of the escape from the cities and from climate-hazardous areas (coasts, fire danger, inundation danger, heat danger). In particular, a strong increase of urban Green Growers jumping over to the Basics side − because they see that the first battle is a lost one, and thus they themselves proceed to amputate their innovation function within the Usuals sector − may put high pressure on local authorities (through elections, protests and uprisings) to provide Basics-proponents (and the population in general) with accessibility to local resources with which basic needs can be met (land, buildings and markets in particular).

And there we see how the second and third battle can then jointly (supporting each other) intertwine into a force that culminates in a central (constitutional) intervention on freedoms − in particular the freedom to build up unlimited reserves and to spend them as one pleases − and the transfer of possessions (assets), in such a way that the current rules are finally abolished and the total society, up to every corner, can transform into a low-emission, low-tech, short-chain economy by means of new rules on acquisition and use of property (especially real estate).

Man has traditionally been strongly forward-looking. Grown-ups sometimes doze off slowly, but are wide awake when the horizon − the price of bread and energy, for example − starts to cloud. Younger people, on the other hand, have their future screeners working much more vigorously because they are full of existential uncertainties − in despair, in fact − constantly faced with essential choices (body, partner, income, living place) regarding their life path. 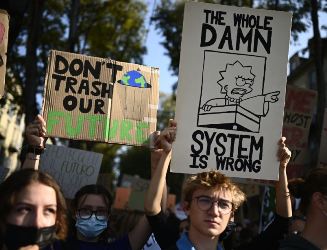 At recent demonstrations, I saw the cry "Give us our future back" pass by several times. To me, a sign of the underground tension currently building up between people in terms of climate-solution direction. That text from those throats is cranking up something very sinister. Namely, that with every minute we wait to remove the real barriers to scaling up sustainable climate behavior, with waiting to unblock the constitutional and regulatory room for maneuver of young adults to shift acutely to zero-emission lifestyles, we are forfeiting fastly more of humanity's future. And this is currently going at a glacial pace. The breach of the life-threatening 1.5 degree rise limit was a short time ago (in 2018) not expected until 2040, and is now (August 2021) expected as early as 2030.

Moreover, we can be 100% sure that this is not the last shortening of the time available for the conversion to net zero. In short: we need to attack the societal rules that block our room for maneuver vis-a-vis climate change, and thus first converge on them in the Basics proposals, and then fight against countervailing forces. Local producing and consuming − we can no longer ignore it − must take off quickly. The maintenance of nature, humanity, youth, and love will drive us over the highest barriers.

back
♦  All text contents are free to use
♦  Comments etc: ina@afwendbaar.nl
Move to top
♦  This site doesn't use cookies
♦  and doesn't apply user tracking
{"autoposition":"0","position":"bottom","title":""}
And sharper ones like this: You can't recycle wasted time.